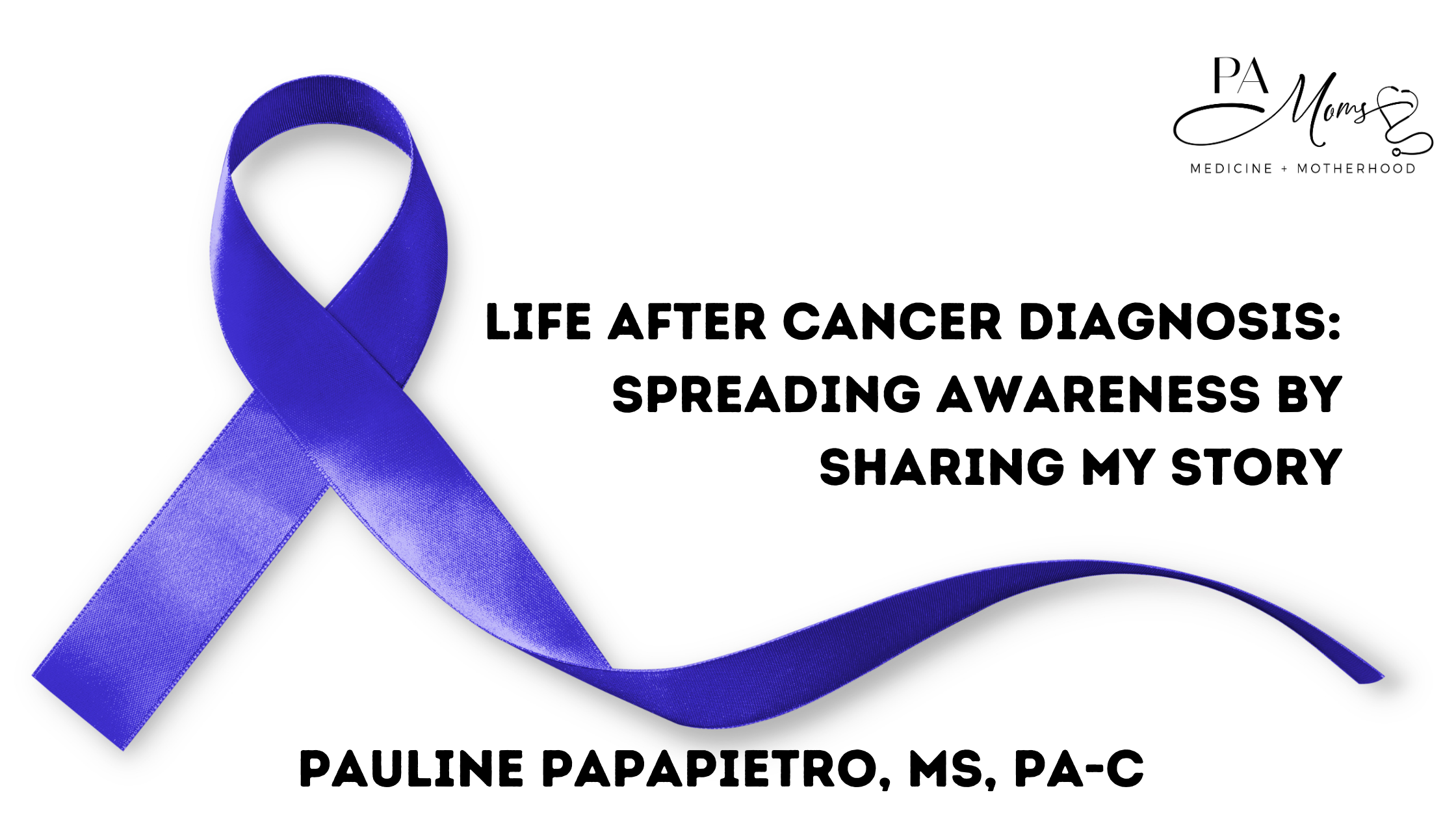 I awoke in my cubicle to the sound of hushed whispers just outside the curtain. It took me a few moments to orient myself to where I was and why I was there. I looked at the IV in my hand, the patient ID bracelet and the hospital gown and remembered, oh – colonoscopy. But why were they whispering? Why was my nurse not in the room like she was when my husband had the same procedure a month earlier? They had come for me in the waiting room to sit with him when he woke up. Why was I still alone? And then it hit me like a sucker punch to the gut. I was about to get bad news. Just as I braced myself my gastroenterologist came in and sat in the chair.

“I’m sorry Pauline but we did find a mass, your instinct was right.”

Numb. I was completely numb. Immediately my thoughts went to my three children and my husband. I was 42. Too young for colonoscopy screening. And according to all I had learned in PA school too young for colorectal cancer. But I knew all too well I most certainly was not too young. The summer prior to my colonoscopy, my daughter’s girl scout leader passed away from stage IV Colorectal cancer at age 50. Her daughter was only 10. She was diagnosed at 49 and prescribed pain medications for a year before they discovered her metastatic cancer. My other good friend was currently in her second year of treatment for stage IV disease. So when I saw a blood clot in my stool, I knew I couldn’t ignore it. I thought about some of the other subtle symptoms I was experiencing that had evolved over the past year and knew I needed to advocate for myself. I had unexplained fatigue and shortness of breath when climbing stairs. I had been reassured by one of my doctors, now that I was in my 40s it was normal to slow down. But I could not ignore that blood, and because I didn’t, I’m still here today.

Those early weeks after the diagnosis were completely overwhelming. A whirlwind of anxiety, appointments, tests for staging and meeting new doctors and trusting my life in their hands. It was a lot to process and all such a blur now three years later. I’d actually rather not remember any of it. But everyday I live with side effects from the surgeries and treatments that saved my life so it’s kind of hard to forget.

I went on to have low anterior resection surgery with an ileostomy, then chemotherapy for four months, then six weeks of chemo pills with radiation, followed by the final step of ileostomy reversal surgery. It was initially stage 1 disease but upstaged with the final pathology to stage 3. The year following treatments, I had 11 partial small bowel obstructions and was admitted for about half of them before I finally got a second opinion with a new surgeon. Eventually I had 2 more surgeries. The first was lysis of adhesions, but I obstructed again a week later so I ultimately had the anastomosis revised. To say my body felt like it had been through a war would be an understatement.

After completing all of the treatments, it became clear to me I couldn’t go back to my clinical job. As a NICU PA I worked long hours and it was my responsibility to be able to lead resuscitations of newborns. Not only would I not be able to physically meet the demands of my job, but emotionally I was in a bad place. I was not ready to handle the emotional side of the NICU. I tearfully resigned my position and then needed to figure out what to do next. I found an open faculty position at a local PA program and was offered the job at the interview. I was excited to reinvent myself and find a new purpose. Very soon after I began working there, my dear friend succumbed to the same illness I had just finished being treated for. I was completely heartbroken. 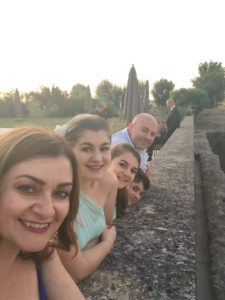 All through my treatments I remained positive. I decided early on even though I could not control what was happening to my body, I could control my reaction. Even on my worst days I would allow my kids to lay in bed with me to watch TV.  And although I felt deep in my heart I’d beat this, there was always that thought in the back of my head if I wasn’t declared NED at the end of this, at least I was making memories with them. After radiation and prior to my reversal surgery, I had the first post treatment CT scan. My radiation oncologist called me that afternoon to give me the good news I was clear. I cried my eyes out. I’d never been more overwhelmed with joy and relief. I can’t fully put into words exactly how I felt.

“No evidence of local or metastatic disease.”

The sweetest seven words I have ever heard. That was nearly three years ago and I’ve since had many CT scans with the same reading at the end, “No evidence of local or metastatic disease.” With each scan the anxiety returns. In between scans I try to forget and I do my best to live without worry. Even despite a global pandemic I’ve kept a positive perspective. I’m so fully aware every day how lucky I am to be alive, to watch my children grow into teenagers, to grow older with my husband and enjoy small moments. 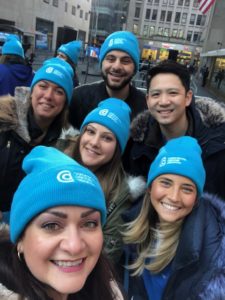 In ways having cancer has changed my life for the better. I no longer stress over nonsense. It has given me a new outlook. That NICU position I had been at for 18 years that I cried my eyes out resigning had replaced me with a new person. If I had died, I would have been easily replaceable to that job, but not to my family.  I will never again overwork myself for a job no matter how much I love it. And I truly loved my NICU babies. But my family will always come first and foremost. 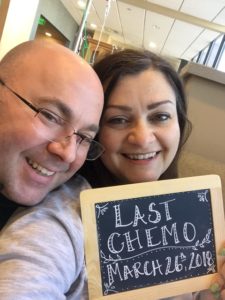 Today is the third anniversary of my very last chemotherapy infusion. It is also the last week of colorectal cancer awareness month. The symptoms of colorectal cancer can be embarrassing which may lead people to delay treatment. My friend thought she was experiencing lactose intolerance by the time she went to her doctor she was diagnosed with advanced disease and died three years later. I can’t help but think if only she had confided in me, I could have urged her to go to the doctor sooner. I share my story with the hope it inspires others to not be afraid to see their doctor or to advocate for themselves.

Colorectal cancer has been steadily rising amongst younger people since the 1990s. The recommended first colonoscopy screening age was recently lowered to 45 by the US Preventative Services Task Force and American Cancer Society. It is a step in the right direction, although it would have been too late for me had I not gone for that colonoscopy. Since my diagnosis, I have connected with many other women who have experienced a similar journey with colorectal cancer. Some are younger than me, some older, some are also PAs and some are still fighting. I dedicate this post to all of my fellow Colorectal Cancer fighters and thrivers. I finally feel like I am thriving after cancer. At my last oncology visit I vowed to my doctor I would begin exercising again. I use the Peloton app and one of the instructors I regularly exercise with has a saying, “I don’t have to, I get to.” And although I know I don’t have to share my story, I am truly blessed that I am still here to be able to. 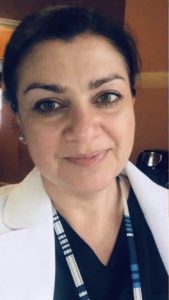 Pauline has been a PA since 1998 and spent most of her career caring for the tiniest patients in the NICU. She is currently part of the faculty at the Wagner College PA Program in Staten Island, NY and will soon return to practicing clinically per diem in the NICU at Staten Island University Hospital.